So we’ve had a pretty snowy year. As a first time mom I get sparkle eyed visions of taking my little one out to make snow angels and sled, then come inside for soft blanketed snuggles and cocoa.  In reality, the more time it takes to wrestle a two year old into snow gear, the less time he or she will actually spend outside. Especially if it is still snowing and the flakes touch their face.  Toddlers kept home from day care on a snow day are also primed to empty every kitchen cabinet, put refrigerator magnets into your toilet and unplug all technology devices from walls. And when you hear “uh oh,” chances are whatever they just broke was not entirely accidental.

You guys, we want to remind everyone that snow days are great opportunities to catch up on all those “projects” around the house you’ve been meaning to get to. Your afternoon nap will be that much more satisfying with the knowledge that you have accomplished so much.

Because of all these factors I tried to devise a few structured activities to make it through the day, or should I say, days of snow. I started to wonder if I should give play dough a whirl again? Because play dough has burned me before.

When my husband and I decided to move in together, he brought along his first born: a 90 lb “Dudley” Labrador retriever.  It wasn’t long before I was entrusted with my first dog sitting venture while Tim went to the Great American Beer Fest (and brought home gold!).  The clues were all right in front of me when I walked in through the front door after a long day at work.  There was an empty storage container with a chewed up lid laying on the floor and Hunter was parked on the sofa with that classic guilty face common to labs.  You  know the face. It looks something like this:

Great, he definitely got into something. But I could not remember what I had in that container. I turned on the overhead light and took in the surrounding horror scene. Red gelatinous substance covered the living room.  Hunter had never killed another animal, even that one time when a squirrel had been hanging out inside his food bowl in our kitchen, but it definitely looked as though something had been ripped apart all over the room.  I stumbled into the dining room trying to get away from the scene before I got sick, only to find even more red goo splattered about.  It was in the kitchen too.

Hunter suddenly started heaving and arching his back, the hallmarks of a dog about to spew.  “OUTSIDE! OUTSIDE” I screamed, running back to the front door, but he didn’t make it.  A fresh pile of red goo. What in the hell was in that container?!?

I ended up cleaning dog barf for the rest of the night and feeding him boiled chicken and rice to soothe his tummy.  The next morning found us at the vet, where he was admitted over night with dehydration.  Calls to Tim did nothing to make me feel better, he could barely hear me over the sounds of imbibed brewers partying in Denver.  That night I pieced the mystery together.  It appeared as though Hunter had gone through some boxes in our guest room, we  were still unpacking from the move.  One of the boxes contained some resources from my play therapy internship as a grad student.  I now knew what had been in that empty container: 3 pounds of red, home made play dough.

“Please come pick up your dog,” the vet tech sounded very terse on the phone early the next morning.

“Oh good, is he feeling better?”

“Yes. He feels so much better that he ripped out his IV and broke out of his crate. When we came in this morning he was running through the hallways barking and upsetting all the other dogs.”

That ended up being a pretty hefty vet bill.  Over the years, Hunter brought about many, many similar vet trips… though usually over the weekend, so we would have to go to the emergency center and fork over more cash.  He’s scampering about in the doggy afterlife, snuggling with roadkill squirrels and eating dozens of bagels.  We miss Hunter a lot, despite the college tuition in medical payments.

So as you can see, play dough has not brought me a lot of rewards.  But now I have a toddler and I could NOT handle putting him in front of Thomas in the hours leading up to nap time.  So I thought I’d give it a try:

Put the tea kettle on to boil.  In a mixing bowl combine: 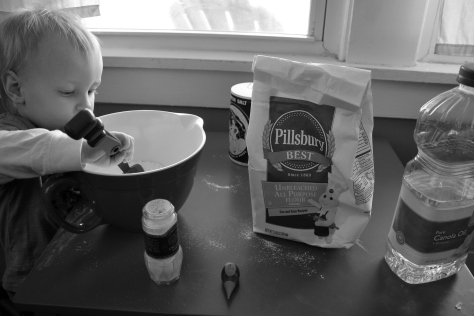 So now we have play dough

After the mixing was done, he did not want to touch it with his hands. Zero cares about playing with it.

So mommy played with the dough, just so I could take a few photos.  He was over it.

He did help with clean up though

so that was pretty much it for play dough.  We tried finger paints

and today we dabbled in water colors

I did use this play dough recipe to make last minute Valentines for his day care group.

So at least I got to use the play dough to make a cute gift.  I think I’m just going to have to wait until he is a little bit older and/or just appreciate his other talents.

BUT WAIT… several weeks later.  He asked me to open the play dough container… 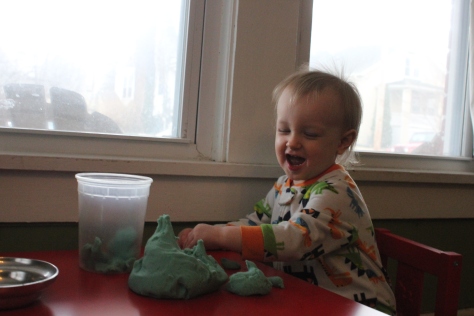 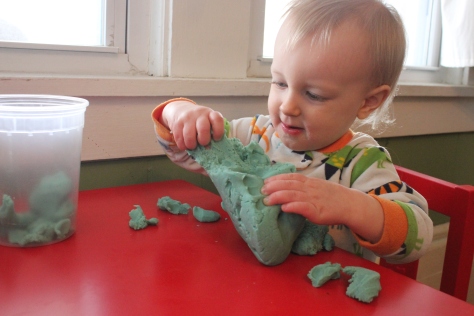